So my last blog was about World Book Day. I've never thought WBD itself is a problem but rather I've pointed out that the practice of dressing up as characters from children's books has the effect of making the lack of Black and Asian characters kids encounter very clear to anyone who is willing to look.

"I'm making my own superhero, and he's going to be AMAZING. He'll have light brown skin, love lamb biryani, and pray at the mosque every Friday. he's going to be British and Pakistani. His name will be... PakCore ."

When I met Muhammad last year, he told me that World Book Day idea came from my writing on the subject. This delighted me. I've not yet finished the book but I'm already getting the sense that Muhammad Khan is part of a new generation of Black and Asian heritage writers in the UK who are crafting stories that broaden the reading experience of young readers. Ilyas is bringing PakCore to life - thanks to Muhammad Khan for bringing Ilyas to life. 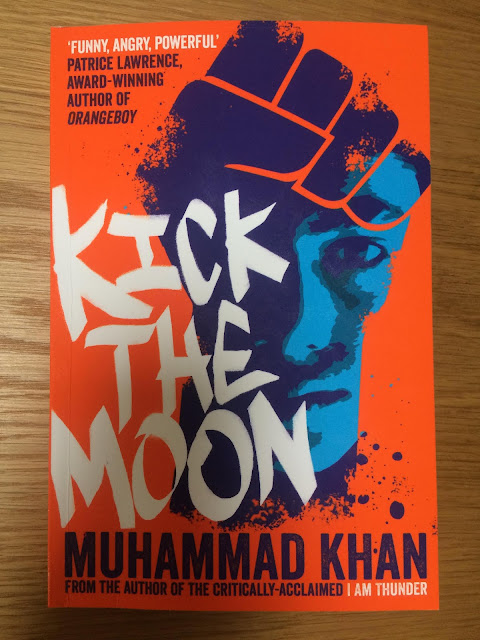 Below is an interview with Muhammad, conducted via email, about his debut book I Am Thunder.


1.     Did you have concerns about your first book being about religious extremism and terrorism?

Yes I did. I’d been working on a fantasy story featuring a Muslim protagonist when the sad news broke of 3 students from Bethnal Green who were radicalised by ISIS. I was baffled, shocked and hurt. Young people were being duped from all over the world. Islam is my faith and seeing it dragged through the mud was unbearable. I remember my students feeling frustrated because they wanted to discuss what was happening but the Muslim students were afraid they might be misinterpreted and end up in trouble or down at a police station (as some newspapers reported), and my non-Muslim students were afraid their questions would be viewed as insensitive or even racist.

Then came the spike in Islamophobia. It was bad enough having to face it myself but I couldn’t comprehend why random people on public transport would verbally abuse, spit at, or even in one case rip the hijab off one of my students. I felt compelled to speak out, to anonymously bring some of my students’ voices to the table. I hoped writing I Am Thunder might facilitate classroom debate across the country which many felt was stifled by the government’s Prevent Strategy. I always felt religious extremism and terrorism were being looked at as if they existed in a vacuum. Due consideration was not being given to the equally toxic rise of the Far Right and endemic Islamophobia.

2.     It felt to me that you were interested in exploring the idea of a generation gap. Muzna’s parents seem to think of themselves as Pakistani first and foremost, whereas for Muzna being Muslim becomes her point of identification. This seems to echo trends where people who perhaps once identified as ‘Asian’ or Indian/Pakistani/Bangladeshi often tend to identify in terms of religion. Do you have a view on this?

There was a time when I sought refuge in Islam as an escape from both Pakistani and British cultures. I felt neither one accepted me. My peers would tell me I wasn’t a true Brit unless I supported the wars in the Middle East or went ‘clubbing or pubbing’ with them. My Pakistani relatives would mock me for “acting like a gora” (white person) and thought I was only pretending not to be able to speak Urdu properly. When I went to the mosque, I would meet people from all walks of life and ethnicities, all of us trying to find our way. I found the environment to be incredibly supportive.

Now I’m older, I’m able to navigate and appreciate every aspect of being a British Pakistani Muslim. My identity is my own and I make no apologies for it.

3.     You describe a range of ways of being Muslim in the book. Was this something that you consciously worked at or did it just emerge out of the plot and characters? (On reflection, I’m not sure that that is a clear distinction!)

Right from the start I wanted Muzna to explore what it means to be a British Muslim and for her to encounter a rich tapestry of multiple and intersecting identities. I soon realised I’d given myself an impossible task! Religion is very personal and people have different interpretations and degrees of devotion. Factor in intersectionality and variables such as cultural background, social status and gender, and the task quickly becomes a tangled web. In the end I had to content myself with trying to convey to readers that Muslims are not a homogenous group and Islam does not promote extremism.

4.     I particularly enjoyed the classroom conversations. I felt there was a hopeful theme of solidarity, for instance, the solidarity shown by Muzna and the other students towards their teacher, Mr Dunthorpe, who is gay and out. Is this influenced by your experiences as a teacher or was this based more on how you hoped things would go in the UK?

I’ve always believed the default for children, no matter where they are from, is to be good and kind. I’m not trying to pretend racism, homophobia and Islamophobia don’t exist, but nine times out of ten a child with such views is simply emulating their parents as opposed to expressing a deeply held belief. At my school there was this general sense of camaraderie which I wanted to reflect in Muzna’s world. I am hopeful the next generation will do better. You have to ask yourself: how on earth did we allow such huge race and gender disparities to exist in the workplace in the first place in? It is inexcusable.

I was adamant that if a student in I Am Thunder was going to be unpleasant or bigoted, they should have a reason for it. It wasn’t about making excuses for them but too often I see teenagers in books being portrayed as evil for the sake of it. In my experience this is rarely the case. Tallulah, Sade and Gary all fall into the antagonist category but each one had a backstory for the way they acted. Occasionally even Muzna is shown to be unkind (when she gives Sarabi the proverbial cold shoulder) because none of us is perfect or right all the time. Sometimes I feel people of colour – particularly females - often get judged to a higher standard.

5.     You have written a main character who is female, Asian and Muslim and who fancies boys. Have you read other children’s books that depict a character that fits that description?

No, sadly not. In all honesty, I didn’t think Muslim teenagers dated. I certainly didn’t. But in the last few years I see things changing for some. I knew of four Muslim hijabi girls who had boyfriends: three of them kept it a secret from their parents, one of them was going to get married to him after her A Levels with her parents’ blessings. I definitely feel this is an underrepresented area in YA fiction.
Posted by hiphopteacher at 06:48 No comments:

hiphopteacher
OK, don't get it twisted. The title of this blog is not some grandiose claim that I am about to school you in the ways of Hip Hop. Nor is it a claim that I am 'The T'cha' within the culture of Hip-Hop - the title will always go to KRS-1 in my book. Rather, this is a space for me to try and work out if there is any mileage in trying to understand my role as a primary school teacher in the UK through the prism of Hip-Hop. Why Hip-Hop? Who says it's a prism? Er, I don't know the answer to the second question, but I'll say a little about why I think Hip-Hop is important to me and what I do...